The Black Lizard by Edogawa Rampo 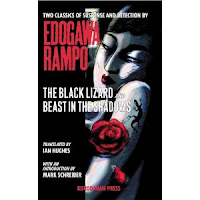 The Black Lizard by Edogawa Rampo Translated by Ian Hughes, published by Kurodahan Press, 2006. Private detective Akechi Kogoro was the action-oriented, cerebral hero of a series of stories and novels written by Hirai Taro (1894-1965), a very popular author in Japan who wrote under the name Edogawa Rampo. Rampo took the name as an homage to the creator of the detective story, Edgar Allan Poe. Rampo was a great fan and scholar of Poe's work, and based his own character's ratiocination for solving murderous puzzles on the skills exhibited by Poe's detective, C. Auguste Dupin. Weird and gothic touches in Rampo's stories, including the appearances of secret codes, also hint at his devotion to Poe. For example, in The Black Lizard, the eponymous female mastermind of the tale sits upon a trick sofa: its interior had been hollowed out as part of a plot to kidnap the daughter of a gem owner. At one point in the novel, she believes the detective, Akechi Kogoro, has hidden within the sofa's secret compartment. She imagines she hears the beating of the detective's heart within the sofa, and the beats grow louder and more thunderous the longer she obsesses about the idea. Shades of “A Tell-Tale Heart.” The Black Lizard also has an underground headquarters, within which she displays her stolen loot as in a museum. Included are men and women she has killed and had stuffed, preserved in life-life poses. Another man, still alive, is kept naked in a cage. The scenes are horrific. Imagine Victorian-era Sherlock Holmes encountering such shocking scenes! Akechi and the Black Lizard clash again and again through this story, as the villainess plots to steal away a teenage girl for the ransom of a rare jewel. Several murders and disguises, including several encounters with seeming doppelgangers, mark the battle of wits and the various traps and escapes that occur within the racing narrative. The plot is pure pulp, and would not have been out of place in an issue of Dime Detective. Not many of Edogawa Rampo's stories are available for English readers, but the ones I've read have been quite entertaining examples of another country's literary phases from the past century.

Comments:
This is highly informatics. crisp and clear. I think that everything has been described in systematic manner so that reader could get maximum information and learn many things.
private investigators Madrid